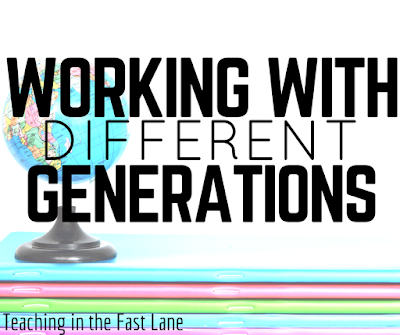 Working with different generations can be a challenge. Let me set the scene. You have just been hired by a new team, or you have new hires on your team. You are so excited about the new, fresh ideas that will come. Then it happens. You have your first new team meeting, and you just aren’t meshing with your colleagues.

There are multiple issues, but one of the overwhelming issues seems to be the generational differences among the team. This is leading to communication issues, and the tension is building. Before you lock yourself in your room and eat multiple king-sized candy bars, take a moment to consider the following. It might be a life saver!

A lot of the time there is a split in teams between the veterans and the novices. Teaching is a unique field in that it requires a first-year teacher to achieve the same goals as the veteran next door to them, sometimes with little to no support. It is hard to remind yourself though that we were all the novice at one point, and how the veterans supported you is often how you will turn around and treat the novice on your team.
It used to be that veteran v. new was a much more simple divide because you had the veteran traditionalists who were lifelong teachers. They knew what worked. Didn’t really want to stray from what they knew, and were nearing retirement. On the other side of this are the fresh to the field teachers that were looking for guidance, while still maintaining the inspiration for teaching that they got from the new ideas they learned and were excited to implement.
Today though, the generational differences are a lot muddier. In the classroom, we still have the tried and true traditionalists, but we also have four more generations along with them. This leads to new challenges, but can also open the door to fantastic collaboration!

Each generation is influenced by the world around them and the events that took place during their life, especially during their adolescence.
Traditionals were born prior to World War II and are often known as Depression Babies. They often have excellent communication skills, are thrifty, stubborn, have an excellent work ethic, are respectful of authority, and are very loyal to their friends and family.
The Baby Boomers were born post World War II through the mid-sixties. They are greatly influenced by events like Woodstock, the Vietnam War, and the Civil Rights Movement. Baby Boomer’s traits include working well as a team, questioning authority, are well-educated, and work well under a deadline.
Next comes Generation X who were born from the mid-sixties to the early eighties. Generation X was the first generation to commonly live in a home with two working parents or with a single, divorced parent. They are generally very independent, hard-working, have a social conscience, make time for family, and hate red tape.
Generation Y’ers that were born from the mid-eighties to mid-nineties have come to be known as the entitled generation. They support the swing back to family-centered life and were among the first to have “helicopter” parents. They are generally very socialized, socially responsible, value relationships, seek a work/life balance, loyal, and savvy with new technology.
The final generation, that is starting to enter the workforce are Millennials who were born from the mid-nineties onward. Social media plays a large role in their lives. Their traits include being dependent on technology and well as their families, socially liberal and welcoming, and environmentally friendly.

Now that we have defined the different generations you may come across, here are some tips for working together cohesively for the betterment of all our students.

Each generation is working with a different set of values, and it can cause a lot of tension when these values come into conflict with one another. For example, Traditionals and Baby Boomers would prefer to work together to make all decisions, while Generation X’ers want to make a decision and move on. This shouldn’t be viewed as an inability to work with a team, but a reflection of their dislike for red tape. They believe in the principle of work smarter, not harder.

For all of the differences in generational values and traits, there are a lot more things they have in common, especially as teachers. You can find commonalities in any generation, but there are some more surprising ones if you look.
Traditionals and Generation Y’ers both value stability and security. They crave an environment where they can be themselves and excel. 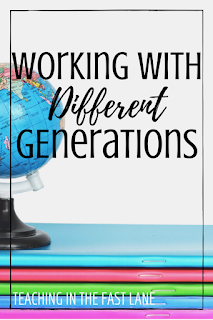 Baby Boomers and Millennials both show more comfort with diversity and social change. They tend to be more accepting and welcoming of outsiders than other generations.
There are many more examples, but these should get you thinking.

While the earlier generations prefer to be more independent in their workspace, the later generations desire specific feedback. Have an honest conversation with your team as to how they feel about this. What seems like constructive feedback to one can feel like micromanagement to another. This is an important balance to strike.

One of the most important elements to working with different generations is to share your feelings, instead of bottling them up. This is a hard balance to strike though because while you want to make sure that your feelings are heard, you don’t want to be overly vocal and come off as demanding or whiny. By being open from the beginning, you can avoid misunderstandings in the future.

Use Each Other as a Resource

Each person and each generation has valuable life experience and ideas that can lead to your best school year yet! Don’t be afraid to ask questions, try something new, and dip your toe outside of your comfort zone. Everyone can be better by pooling your resources and keeping your common goals in mind. Each generation’s traits should be kept in mind, and given leadership roles that fit their personalities.
Are you a first-year teacher? Join our Facebook group for support and encouragement throughout your first year of teaching and beyond! 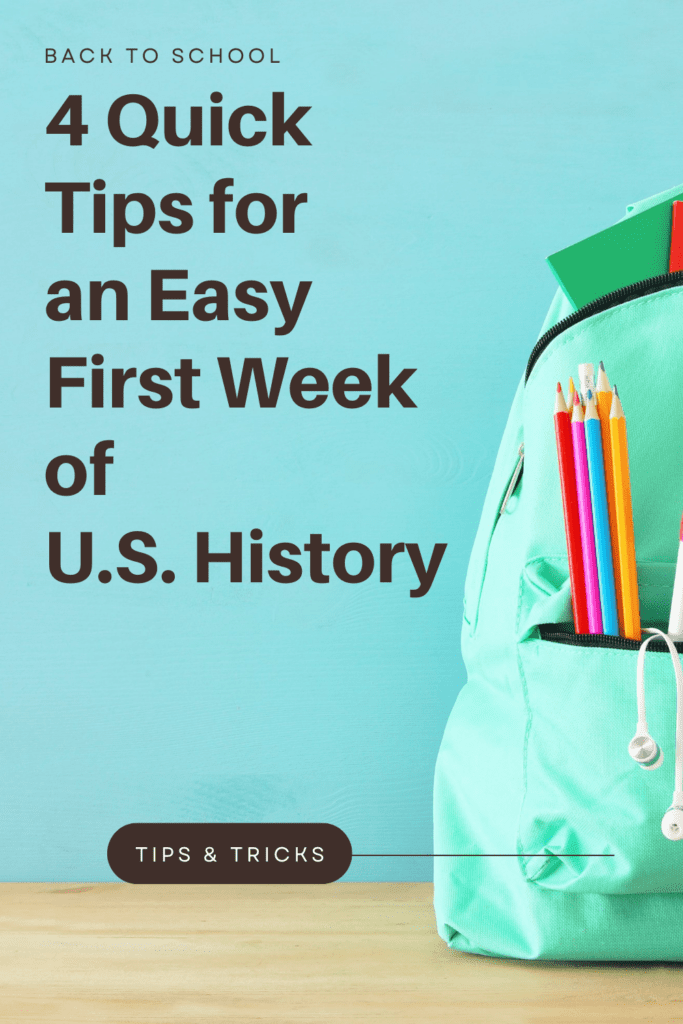 Are you worried about planning your first week of U.S. History lessons? Don't be! In this post, I will walk you through four tips to get started on the most successful year of history yet. … END_OF_DOCUMENT_TOKEN_TO_BE_REPLACED 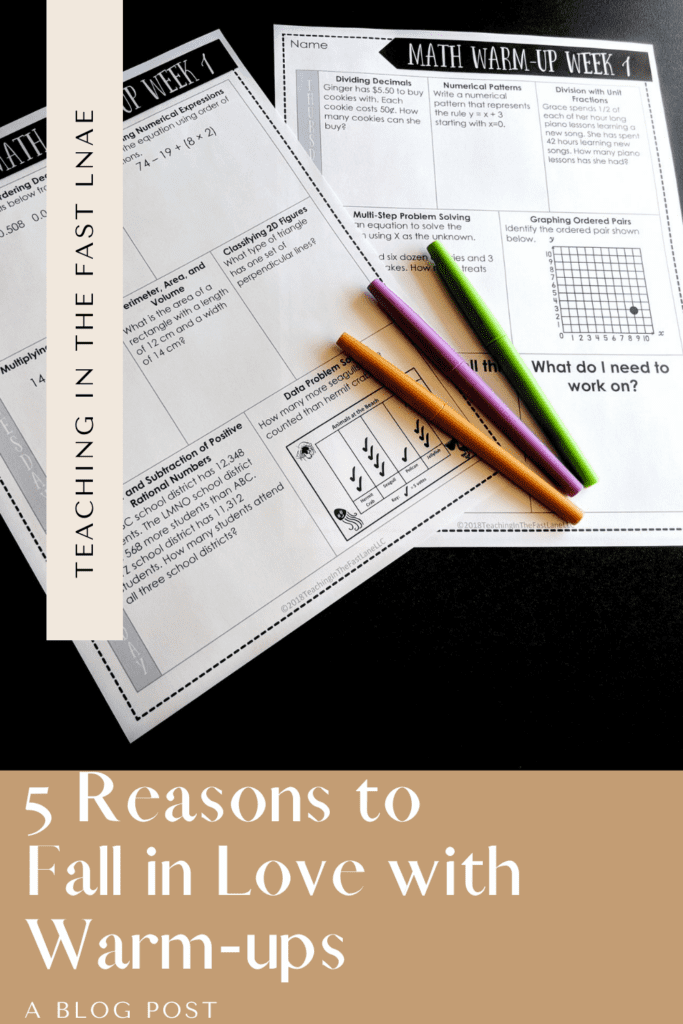 Do you use warm-ups or bell ringers in your classroom? Check out this post for 5 reasons why you will absolutely love them! First, let's talk about what a warm-up is. They go by many names … END_OF_DOCUMENT_TOKEN_TO_BE_REPLACED 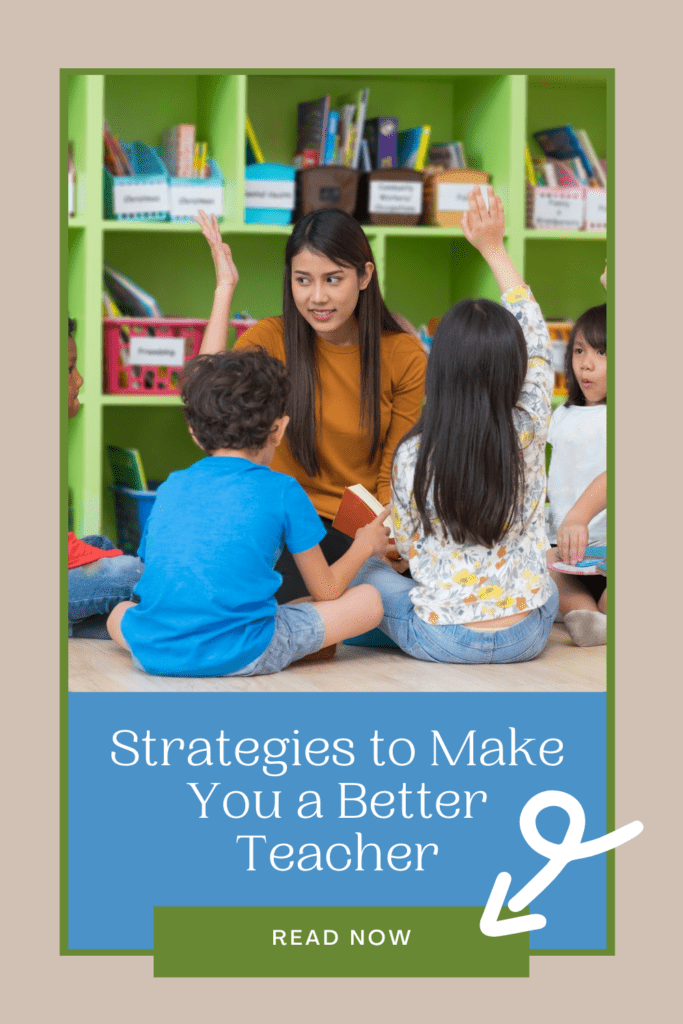 What is your favorite teaching strategy? Read on for three fresh ideas to start using today! These strategies are ones I have personally used in the classroom and which have all been proven to be … END_OF_DOCUMENT_TOKEN_TO_BE_REPLACED